This sums up everything... uplne sa stotoznujem s tym, co tu napisal chlapik na Metacritic:
Game is inferior to Doom 2016 don't become victim of the overhype !!! Where do I even begin? Forced bethesda.net integration, blinding neon UI, complete lack of coherent game design. I honestly don't believe that anyone from Doom 2016 had any hand in making this, it feels like it was made from rejects from the borderlands design team. The whole game has a disgusting cartoon aesthetic slapped on it even at Ultra settings, on one hand you can have a cacodemon, a demonic flying ball of blood covered flesh, and then you toss a grenade in its mouth and it makes a cartoon burp noise followed by a cartoon pop sound when you pull its eye out. They even added a respawn system based on "1-up" items found as literal glowing helmets with the word "1-up" floating next to it. Instead of Doom 2016's secrets, where you would find a figurine hidden in each level, there are giant neon glowing question marks that spray confetti at you when you reach them. The tonal whiplash from the expectations of the series, and the execution here is stunning.

The gameplay is abysmal as well. You start with a max ammo capacity of 16 shotgun rounds, and can only refill it with your two chainsaw uses before having to look around the map for the haphazardly placed incredibly sporadic ammo items. There is no pistol to alleviate the strict ammo limits, and your punch takes more than ten strikes to kill a basic possessed zombie. The seemingly interesting enemy weaknesses end up being the only way to fight the enemies, as they take nearly no damage from anything else. It isn't even worth it to shoot cacodemons, they can tank your max capacity of shotgun ammo pumped directly into them, you have to wait to throw a grenade in their mouth and perform the same single glory kill animation every single time. The game is constantly interrupted by hint pop-ups, and when you disable those the screen will still be cluttered up with achievements telling you that you unlocked a hipster bowtie for the archvile in multiplayer taking up a third of your screen. 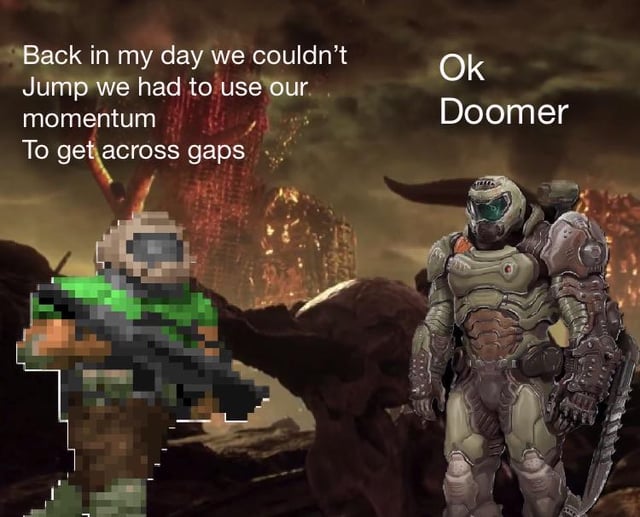